Delivering antifungal medicine through holes in the infected nail may make it more effective.

Fungi thrive where it’s dark and damp, so you’ll find them growing in caves, basements — and the tissues of feet. Shoes and socks are ideal, if unintended, incubators: They keep the light out and trap sweat and other moisture in.

Athlete’s foot is a fungal infection that often affects the skin between toes. Conscientious application of an antifungal cream — including over-the-counter products such as clotrimazole (Lotrimin) and terbinafine (Lamisil) — will clear up most cases.

But when fungi infect the toenails, they’re much harder to get rid of. The fungi that cause toenail infections are known collectively as dermatophytes. When they get underneath a toenail, dermatophytes feast on the proteins in the nail, which results in the nail getting yellow, thick, and brittle. The toenails of the big and pinkie toes are affected most often.

Keratin, the clear, dense protein that nails are made of, is not easily penetrated by medication. If you smear an antifungal cream on a toenail, it’s not going to get through the surface and reach the fungi in and under the nail. You can try ciclopirox (Penlac) in a form that’s applied like nail polish, but it’s only for mild to moderate cases. In addition, it’s not reliably effective. Studies have shown that only 1 in 15 people who use it have a favorable outcome, and the infection often comes back after the treatment has stopped.

Antifungal medications can be taken orally, and they do get to the toenail fungus, albeit in a roundabout way via the liver and the bloodstream. A meta-analysis published several years ago concluded that the newer oral antifungals, which include terbinafine and itraconazole (Sporanox), have cure rates of better than 50%. But it can take a year before it’s known whether a fungal infection is really gone, so trials with follow-up periods shorter than that may not paint a complete picture. The newer drugs, particularly terbinafine, do seem to be more effective than the older ones, such as griseofulvin (Grifulvin V, other brands).

But any oral antifungal drug has two major drawbacks. First, you’re probably going to need to take it for months. Second, you’re exposing your liver to some pretty strong medicine, so there’s a real risk of liver damage.

Harvard researchers are testing two treatments that would take a more direct route to the fungi, yet would still manage to get into tissue that is, well, as tough as nails. One experimental treatment involves the use of short-wavelength light that’s strong enough to shine through translucent nail tissue and disrupt the growth and reproduction of the light-averse fungi. The results, although preliminary, are promising, and patients feel only a slight sensation of warmth from the light, according to Dr. Alexa B. Kimball, the director of a skin disease clinical trial unit operated jointly by Massachusetts General Hospital and Brigham and Women’s Hospital, both Harvard affiliates in Boston.

The other treatment involves cutting tiny holes in the nail. If you’ve ever banged the end of a finger or toe, you know how painful it can be when blood gathers under the nail and pushes on it. Doctors can treat these subungual (under the nail) hematomas by making holes in the nail so the blood can escape, relieving the pressure. Nail trephination, as it’s called, for subungual hematomas has even been done with the hot end of a paper clip (but don’t try this at home!).

Attacking toenail fungus this way involves rubbing antifungal cream into the holes so it reaches the fungi. Application of the cream isn’t a problem — it can be done by patients at home, says Dr. Kimball. The tricky part is making the holes deep enough so the cream is effective, while not going too far and penetrating the nerve-laden soft tissue underneath. The Harvard researchers have used a new instrument with sensors that detect a change in resistance so it knows precisely how far to drill down. They hope to report results from the trial in 2007. In an earlier study, patients reported feeling virtually no pain when the same instrument was used to treat subungual hematomas.

Two important cautions: First, insurance companies tend to view toenail fungus as a cosmetic problem, so you may end up footing the bill for treatment, be it newfangled or an old standby. You may get coverage if you have diabetes, because toenail fungus in diabetics can lead to other sorts of infections. Second, people tend to assume that all deformed nails are caused by toenail fungus, when psoriasis, eczema, and other problems can affect nails. Be sure you have a definite diagnosis before starting any treatment. 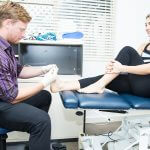